Thirty minutes was not nearly enough time to absorb even the faintest outline of the world of dominance and submission, consensual power exchange, kinky sex, et. all. And when the dishes were done and Danny came knocking on my door, I had better things to do than read The Mistress Manual, so permit me to summarize a year’s subsequent research in three small words: Looking for Love.

A pity you’ve become so jaded. 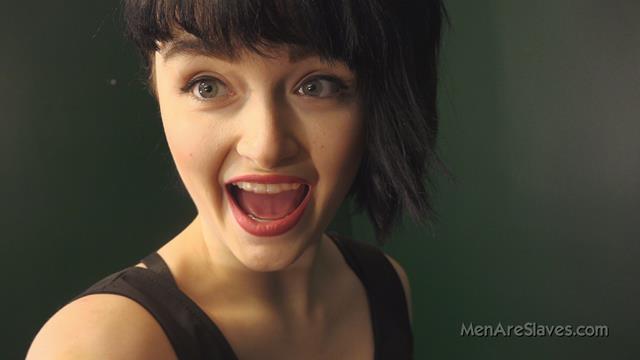 Besides the lucrative (ha) royalties, why am I doing this? Rejecting the notion of meaninglessness (Nihilists, I commend your courage), my purpose is to find meaning in loss. Heartbreaking loss.

If you and yours benefit in the slightest from reading this, if my brilliant insights, clever ideas and our moronic missteps help you to better navigate this dark terrain, if I hold before you a candle and it leads you to safety, then it will be worth all the heartache and keystrokes. Hold hands, please.

Permit me to briefly introduce myself, your guide. My name is Vanessa Prudence Whetstone. About my middle name, alas, Mom had such high hopes. While that was a fail, I love my first name, which goes with my red hair and green eyes. And isn’t the last name just perfect? (Boys, think about it.) I went to UVA, got a degree in accounting, work in a bank, do yoga, and eat my vegetables. I’m pretty and petite. My three bratty younger brothers turned out well (contractor, lawyer, physician). Dad, a retired Army colonel, passed away last year. Mom went to Oregon to live with wild mustangs. So that’s all about me.

Moving on, the kinky toys arrived on Friday, in a discreet box from JT’s Stockroom. It might as well have been organic almonds from California. I placed the box on my bed and slit it open. 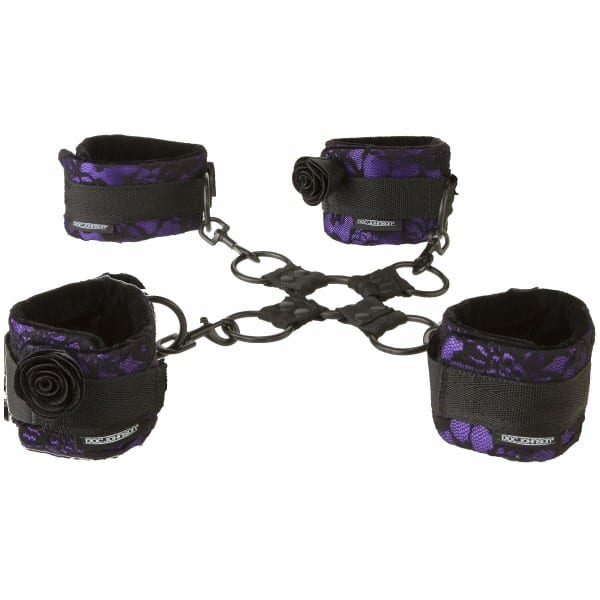 Inside were locking leather wrist and ankle cuffs, a wide-end riding crop, a luxurious leather flogger, an adjustable spreader bar, Japanese clover nipple clamps (elegant looking), and my favorite, a stainless steel and leather cock cage. Why did I select these particular items? Because they looked so sexy on the models in the pictures, I suppose. And because they aroused a premonition of utility. Both reasons equally true.

I caressed my purchases, thinking about how I might use them. I loved the leather smell of the (very) expensive buffalo hide flogger. The nipple clamps looked a little vicious (and convinced me to start out with wooden clothes pins; I had plenty of those around). My favorite item was the cock cage, which seemed to me a perfect, portable version of the slave cage upstairs. Lightning in a bottle, remember?

When I looked at the image of a model’s handsome dick swelled inside the cage, that was another “aha!” Déjà vu moment—I knew I would use this device—but I have to say that the accompanying text, so matter-of-fact, is what sold me: “This cock cage is a very confining male chastity device. It will tend to limit erections and prevent orgasms. There is a locking leather strap that goes around the cock-and-balls . . . riveted to the strap are three more straps that attach to a cylindrical stainless-steel enclosure, known as a “stallion guard” (I swooned at that). The small cock cage had one ring in between the locking strap and the cage, the large cage had two. Which will it be, Madam?

I realized I would have to surprise him with it. But how? If I tried to put it on him here at home, he would be impossibly erect before we even got his pants down. 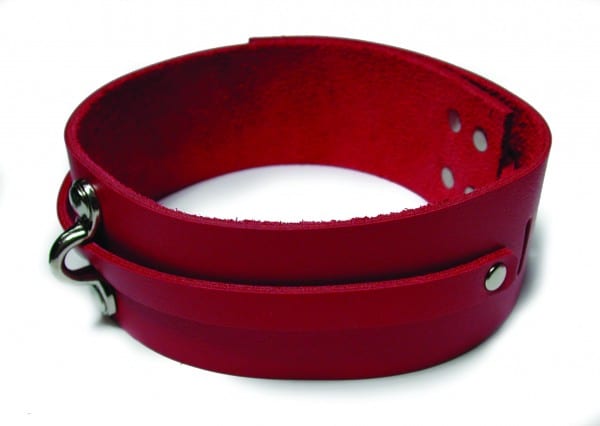 Home assembly wouldn’t do; I’d have to find another venue. Then it came to me: I had a spare key to his truck in the junk drawer. If I could get to his truck, I could put the cage under the driver’s seat and send him a text. That way he would be in a non-sexual setting (well, non-sexual other than that time we had sex in the cab). It would work, especially if he was just getting off work or leaving his apartment.

I checked my watch. Lucky me, I had gotten off work today at four; it was just now 4:30 p.m. The strip mall where we both worked was only ten minutes away. I wrapped the cock cage inside a plastic bag, grabbed my phone, purse and the spare key from the junk drawer and flew out the door. I made it to the auto repair shop and spotted Danny’s truck with fifteen minutes to spare, an hour to spare if he got bogged down with last-minute Friday oil changes and inspections, as was often the case.

Danny always went home to shower and change before coming over for our Friday night dates, so I had to think this through. OK, I’d put the bag under his seat, text him to call me before he came over.

I parked in front of the floral shop two stores down so he wouldn’t see my car if he happened to be parking a car outside the garage for pickup. Feeling like I was in a spy movie, I made my way to his truck, staying behind shrubbery and parked cars so he wouldn’t by chance see me approaching. Jason Bourne would be proud. Fortunately, Danny’s truck is ancient, so I could open the passenger-side door without fear of triggering an alarm.

I inserted the key, unlocked the door, and leaned across the filthy footwell (note to self: yuk, he needed to clean his floor mats), staying low and out of sight. The plastic-wrapped cock cage went under the driver’s seat. I high-tailed it out of there, mistress mission accomplished.

Chastity. There are entire websites devoted to the topic. And some porny fiction. But in this context, the Mistress-submissive relation, it means the control of the man through his willing submission to your control over his orgasms. The power of this first became apparent to me when I threatened Danny with not just a spanking but no orgasms for a month, and then I blurted out that if he failed me I would lock him in a cage and throw away the key. That sent his eyes rolling back in his head, deep into subspace. There’s the big red master power button. A man wants you to own that power. Why?

Here’s my theory: men know they are dogs, and they hate themselves for it. But they just can’t help themselves, they need you to help them. Take charge of a man’s sexual desire and you help him to be a better man. His eyes may still wander, but that invisible bond of your power to grant his orgasms, that is ten times more powerful than the attraction of casual sex. Really. So when you relieve your man of this burden, he loves you for it. He wants you to have this power. I think this may be true of all men. 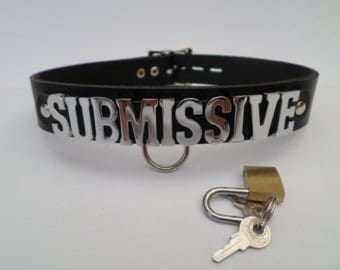 All this was just a woman’s intuition on that fateful Friday afternoon when I sent Danny that text. Somehow, I intuitively suspected this dynamic, but I didn’t know for sure.

When he called me as I drove home, it was obvious the ‘pet text’ had piqued his curiosity. I toyed with him, “There’s something I want you to put on before you come over tonight.” That evening, we were going out to dinner and then to a club to listen to a musician we both liked, in town for a one-night stand.

The club was casual, so I found it amusing Danny’s thoughts went to a tie.

“Well, not exactly a tie, but it will sort of have you tied up.”

A long pause. “You don’t expect me to wear that collar in public, do you?”

“No, silly boy. Collars are cute on Goth girls with tattoos, not guys. Yuk.”

“I’m just leaving work, heading home. Is it something I need to pick up?”

“It’s under your seat, Danny.” As I said this, I had a vision that the discovery of the cock cage under his crotch might totally distract him and he’d crash into oncoming traffic. “Danny, don’t reach for it now! Wait until you get back to your apartment. That’s an order!”

“Okay, I’ll wait.” He didn’t sound convincing. I could see him reaching under the seat.

This Mistress/slave thing can save lives in a crisis. Especially since men never listen.

Take off your clothes!

That was better. I continued, “When you get over here, I want you to take off your clothes, put them in a neat pile, put on your collar, and present yourself to me. I’ll be waiting in the living room.”

Now I had his attention. “Be at my house by six-thirty, understood?”

Ladies, we have the power to make the male world punctual.

I pulled into my driveway. “Ok, I’ll see you soon, pet. Be sure you’re wearing my gift.”

Forty minutes later I heard his wheels crunching on the gravel. I had put on my skimpiest black dress and those black leather field boots, which I thought might be clunky but actually looked amazing with the short dress. I ran over to the living room couch with my laptop, the browser opened to an online leather-and-lace store. Very sexy stuff.

I didn’t own a single leather garment and my lingerie collection was fairly tame. I was pretty sure Danny would happily buy me anything in the catalog.

I heard him open and close the kitchen door. Next the sound of him putting his keys on the shelf. Then muffled sounds; he was stripping down. A pause. Folding his clothes neatly. Another pause. The sound of the junk drawer opening. Putting on his collar. Good boy. He’d make his way into the hallway, turn the corner and see me waiting for him on the couch in my sexy short dress and tall boots. I heard the sound of his bare feet padding down the hallway . . . then it stopped. What was he up to?

To my surprise, when he entered the room he was on hands and knees. He crawled forward until he was in front of me. He lowered himself, eyes cast down, forearms outstretched, a few inches from my booted feet. All I could think of was, ‘good slave.’ He had his collar on. I was dying to see the cock cage. “You may kiss my feet, slave,” I said. I put my feet together, so that the tips of the boots were under his lips. He kissed them passionately. Clearly his foot fetish included boots, too.

“Rise, slave,” I said, sounding a little like Cleopatra. What the heck.

Poor thing. I loved it. Loved it.

The Reluctant Mistress and Her Unexpected Transition Part 6