The Reluctant Mistress and Her Unexpected Transition Part 10

The Reluctant Mistress and Her Unexpected Transition Part 10

I woke up early. The red digits of my alarm clock glowed 6:46. I got up, took a shower, made coffee, got dressed. I picked the tangerine outfit, the one Danny remembered from our first encounter. Pale cream blouse, white lacy bra underneath. The strappy shoes, open-toed with two-inch heels. While the coffee brewed, I opened my laptop and read the contract. I had rewritten it a dozen times last night, mostly condensing it to the bare essentials, down to a page and a half. I found a few grammatical errors and some typos, made the changes and hit ‘print.’ I heard the printer come to life in the hall closet. 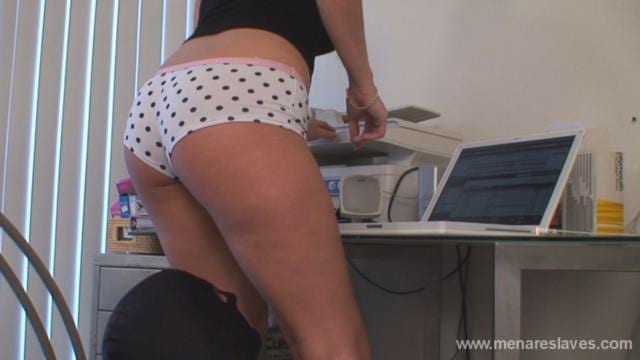 Upstairs, silence. I figured with all the noise I made, Danny would be surely awake by now. That is, if he hadn’t been up all night, unable to sleep from either mental or physical discomfort. Probably both. The printer stopped. I opened the closet door, pulled the sheets, took them to the kitchen and stapled them together, then carried the papers to the dining room, setting it at Danny’s place. He’d need a pen. Back to the kitchen, grab a pen, carry it to the dining room. Back to the kitchen, pour a cup of coffee, stir in some skim milk from the water bottle, sip my coffee, wonder how it went last night for Danny.

Unless he had changed his mind.

The kitchen clock read half past seven. Time to go upstairs and see how Danny fared through the night. I put down the coffee and went to the staircase, making plenty of noise as I climbed. I wanted him in position when I walked in. He was, looking the same as last night, apparently none the worse for the confinement. He even had a hard-on, which surprised me. Either it was a morning hard-on or he had stroked himself into an erection. Either way, I was flattered. As I circled the cage, I observed that Danny kept his head still and eyes cast down. Good slave. The milk jug was in the back of the cage.

“Did you sleep well, slave?”

Danny looked up with a shock of recognition when he realized what I was wearing.

“I’m going to let you out of your cage now, slave. I want you to go downstairs and take a shower. You’ll find a key by the washbasin. Take off your collar and cock cage while you shower, then put them back on. Crawl out to the dining room when you are done. We’ll look at the contract together.”

I unlocked the padlock, slid the latch, opened the door, and took a step back. Danny started to crawl forward but saw that I was blocking his exit.

“What are you supposed to do, slave?”

“Did you forget something, slave?” He froze, thought for a moment. Then he backed into the cage, reaching with his right arm for the milk jug. He crawled forward, back into position at my feet.

“Dump that out in the toilet, slave, then rinse it out while you shower. You can leave it under the vanity. You’ll probably be using it again.”

“Go.” I stepped aside and Danny crawled forward to the door, then rose up stiffly. He disappeared down the stairs. I looked around the room. Light flooded through the dormer. Outside, I heard a school bus rumble down the street. I went to the window. Another beautiful fall day. We had enjoyed a string of them. I could smell coffee from the kitchen. Gazing at the brilliant yellow Gingko tree in front of the house across the street, I wondered what Danny had decided. For some odd reason, I wondered what we would wear at the Halloween party this year. That is, if we were still a couple. Assuming we were, it would be fun to make Danny cross-dress. I’d be an airline captain and he’d be a flight attendant.

I closed the door to the cage, hung the lock on the latch, then headed downstairs. Danny was still in the shower. I poured myself a fresh cup of coffee and took it into the dining room. I took my seat at the head of the table and picked up the contract. I read it again.

“I, Daniel Simon Barton, born March 21, 1992, being of sound mind, enter this agreement freely, without any mental reservation or purpose of evasion, in order to develop my character and to obtain the benefits of intellectual, moral, physical and spiritual growth.”

I made that up, but I thought it read pretty good. The second paragraph got specific:

“I, Daniel Simon Barton, hereby enter bondage as the slave of Ms. Vanessa Prudence Whetstone. This agreement shall be binding on both parties, and last six months, from the date of this agreement, today, October 15, 2014 until April 15, 2015. Under the terms of this agreement, Ms. Whetstone shall have full authority over me in all matters, private and public, encompassing all actions and intentions, without restriction. Such authority shall extend to my body, diet, exercise, sexual activities, intellectual and physical pursuits, recreation, work, management of time and finances. Nothing absent from this list shall be excluded from the scope of Ms. Whetstone’s authority, which is absolute.” 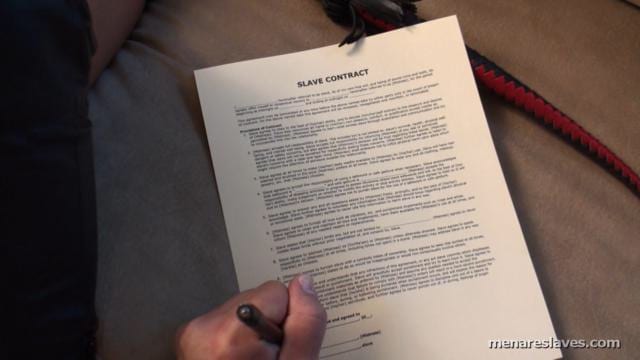 The third paragraph was specifically about physical domination and sexual practices:

“I, Daniel Simon Barton, agree that Ms. Whetstone has total power over my sexual activities, any form of sexual release, specifically orgasms, and may engage in anal play using dildoes and butt plugs, may fuck me using a strap-on cock, may restrict my breathing with her hand, ball gags or tape, may blind me with blindfolds, may exercise any form of bondage, may torture my nipples, may pour hot candle wax on my flesh, may bind me with chains, may restrict my cock with a chastity device for any period of time, may torture my cock and balls with any instrument, may confine me in a cage for any period of time, may defile me by any means, may practice domination in all its forms, may bind me with handcuffs and shackles, may dress me in any clothing, including ladies high heels, lace, lingerie, latex and other feminine clothing, may force me to masturbate, may demand oral sex at any time, may engage in any form of role playing, may impose sensory deprivation, may spank and paddle me at will, may speak to me in a derogatory and humiliating fashion, and may flog or whip me with and without cause.”

The fourth and final paragraph was on the top of the second page. It was the one that I thought might scare Danny to his senses, make him realize that this was not just sexual domination, this was total domination over every aspect of his life:

“I agree to Ms. Whetstone’s complete authority over my daily activities, the use of my time and scheduling of appointments and future events. I agree to her authority over my short- and long-term finances. I agree that all my earnings will go into an account managed by Ms. Whetstone, that she will issue me a weekly allowance, and that purchases of twenty dollars ($20) or more must be cleared in advance. I further agree that Ms. Whetstone may allocate any portion of my income against expenses, make distributions and/or investments with my savings, and may dispose of any and all property at will. Finally, I agree that subject to any legal encumbrances, Mr. Whetstone may terminate credit cards or real estate agreements, including the rental agreement at my current place of residence. Any funds or financial instruments not addressed above fall under Ms. Whetstone’s authority, without exception.”

What’s not to love about that?

I put the contract down and waited. It was eight o’clock when Danny came into the room and crawled around the table to his place to my right. I had removed his chair, so the hardwood floor was open. I stayed in my seat at the head of the table, but extended my right shoe so that he could kiss it.

“I presume you had plenty of time last night to think over our proposed agreement, slave,” I said.

“And you’ve decided you wish to proceed?”

“You think so or you know so?” I looked down at the back of his head, wondering what was going on inside. Was he going through with this? His hair was getting long; it was still damp. He needed a haircut. “Well, let’s see what you think once you’ve read the contract. It’s on the table. Sit up and take it.”

Danny rose to an upright position, balanced on his knees and bare feet. For the first time, I saw that his penis was flaccid in the cock cage. That was interesting: perhaps it meant the seriousness of what he was contemplating was finally settling in. 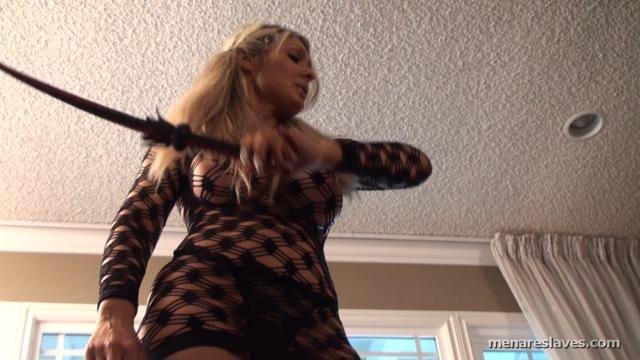 Well, I wasn’t going to make it any easier on him. If he wanted a Mistress, then he would have one, but only if he fully committed to being my slave. Otherwise, this was just a fantasy—Danny’s wet dream. “Slave, take the contract and then get back down,” I instructed. “Put it on the floor and read.”

Danny took the papers off the table. He dropped back down to the floor with the contract between his hands. It didn’t take him long, maybe three minutes for the first page. He made no comment, folded the first page over, and began reading the second page. I couldn’t see his face, but I had been watching his chest expand and contract with each breath. As he read the second page, his breathing slowed, then stopped for what seemed like thirty seconds. Then he resumed breathing.

I took that as my cue. “Are you done reading, slave?”

“Do you have anything to say?”

“May I speak freely, Mistress?”

“You may, but before you do, you should know that contract is non-negotiable. Take it or leave it.”

“Yes, Mistress, I understand. I only wanted to clarify that when I circled those clothing items in the survey, the lingerie and lace and high heels, I meant that I liked seeing you wear them—not me.”

I was glad Danny’s eyes were cast down, so he couldn’t see my smile. “I thought that might be the case, slave,” I said. “But perhaps I would enjoy dressing you like a sissy girl.”

There was a long, pregnant pause. Then he replied, “Yes, Mistress, if it pleases you.”

I almost laughed. Here he was, about to enter an agreement that gave me total authority over his mind and body, an agreement with a financial clause that reduced him to taking an allowance, and his biggest concern was not wearing women’s underwear?

“So are you prepared to sign the contract, slave?”

“Sit up, hand me the contract.”

He sat up. Wonder of wonders, his cock was now fully erect, swelled in the cage. I wondered if it was the thought of an allowance or having to wear women’s lingerie that turned him on. I took the contract and signed and dated it, then handed him the pen. “Are you sure, Danny?”

He looked me in the eye. “Yes, Mistress, I’m sure. I’ve never been so sure about anything in my life.” He signed on the dotted line and filled in the blank: 15th of October 2014. It was done.

I took the contract from his hand. “One more thing.”

“You’re calling off work today. Tell them you’re not coming in.”

The Reluctant Mistress and Her Unexpected Transition Part 8

The Reluctant Mistress and Her Unexpected Transition Part 11