John Gets The Surprise of His Life 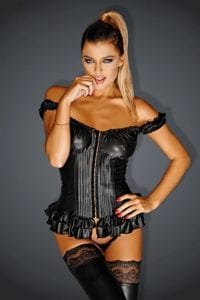 Sasha started unlocking the front door of hers and John’s house, a smile on her face as thoughts of what’s about to happen tonight floated through her mind. When she finally opened the door, she shouted,

When she didn’t hear a response back, the smile spread further across her face as she quickly rushed inside and closed the door behind her, hugging the bags she was carrying close to her chest.

Closing the door, she rushed up the stairs to their bedroom to get everything set up quickly. It took her about 30 minutes to undress and put on the new outfit she bought today, get her hair and make-up ready, set up in the bedroom, and check on her project in the basement. Fortunately, she didn’t have to wait long after that, as soon as she was coming up the basement stairs, she heard John’s car pulling in and stood at the top of the stairs.

When she reached the top, the front door opened, and John’s mouth opened to say something, but when he saw Sasha standing at the top of the stairs in a black pvc corset and skirt that came just below her ass that hugged her curves perfectly and accentuated her 34 C breasts. She was also wearing fishnet stockings that were connected to black garters that ran up under her skirt. From the angle, John was at he couldn’t see under her skirt, but he didn’t think she was wearing any panties underneath all of that.

The only thing John could do was nod his head, his eyes roaming all over her body, appreciating everything the pvc was hugging. She drew him in closer and right when she was about to kiss him, she whispered,

John only nodded, liking where this was going.

Take Your Clothes Off

Without a moment’s hesitation, John stood up straight and immediately started taking off the button-down shirt, almost ripping it off with his tenacity. Then he undid his belt and his slacks and slid the slacks off with the belt still in the loop. All that he was standing in now was his boxers and his socks. When the belt hit the floor the boxers were already halfway down his legs, and he was bending down to take his socks off. When they were off, he was standing there, naked, his cock standing at attention.

He did as she commanded, not wanting to second guess anything in case this would all stop. She grabbed him by the waist and started directing him somewhere in the room. Normally he would be able to tell, but with all the thoughts flying through his head of all of the things they could do, he didn’t really care.

He asked, still keeping his eyes closed. With a smile in her voice, she replied,

Not caring to elaborate on anything just yet.

John didn’t say anything but he knew something was about to happen and he wasn’t sure if he would like it or not. When his hands were cuffed and his ankles tied, she stood up and ran her finger around his waist, sending shivers throughout his body. After a couple of seconds, she patted his back and said,

John turned his head to face her and asked,

When she removed her hand, his eyes were closed and he didn’t say anything. Walking out of the room, a smile spreading across her face. She was gone for maybe a minute and a half, but she came back just like she promised. She didn’t say anything, but John felt her getting on the bed in front of him, and when she got herself settled, she said, 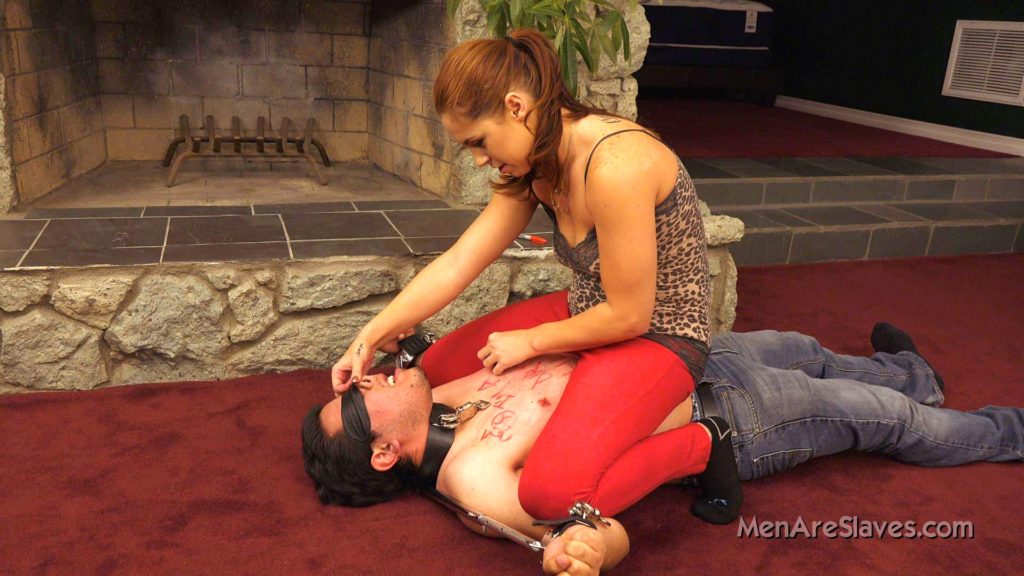 The first words to come out of his mouth were,

The only thing Sasha said is,

When she got it in a couple of inches, she stopped to let him get adjusted to the member in his mouth. When he seemed to relax, she started to face fuck him, slowly at first, then picked up the pace a little bit when he adjusted to the tempo, but never taking on more than two inches. After three minutes of fucking him, she pulled out of his mouth a string of saliva connecting the tip of her cock to his mouth, which quickly fell apart as he coughed.

She watched him as he coughed making sure he didn’t choke or anything and when he seemed okay, she slid off the bed to get behind him.

He asked her again, his head swimming. She leaned over him, her cock nestled in between his ass cheeks, and she whispered,

He tried to turn his head back to face her and he said,

She gave him an inquisitive look and replied,

John’s eyes opened wide in shock and fear and stared at her, not sure what to say. She gave him a reassuring smile and said,

A cruel smile spread across her lips as she said,

Sasha cooed enjoying this probably as much as John is. She looked down at his cock and smiled watching it throb from pleasure like it always does when they try something new. She pulled her finger out and leaned in further to him and whispered,

Then she stood up, grabbed her fake cock, and lined it up with his asshole placing the tip of her cock at the entrance to his asshole, and started slowly thrusting into him. John gasped with the panties in his mouth and lurched forward from being penetrated.

Sasha grabbed both of his hips and widened her feet a little bit more to keep her balance as she thrust further and further into him. She stopped every half an inch to let him get used to the cock in his ass. When her groin hit his ass, she let him get used to it as before and after a few seconds she said,

Then she started thrusting into him, slowly at first to build up a rhythm that was comfortable to both of them, then picked up the pace a little more. She was doing short quick thrusts into him, banging her groin into his ass over and over again. The sound of skin hitting skin combined with both of their moans of pleasures and the smell of her sex excited them terribly. 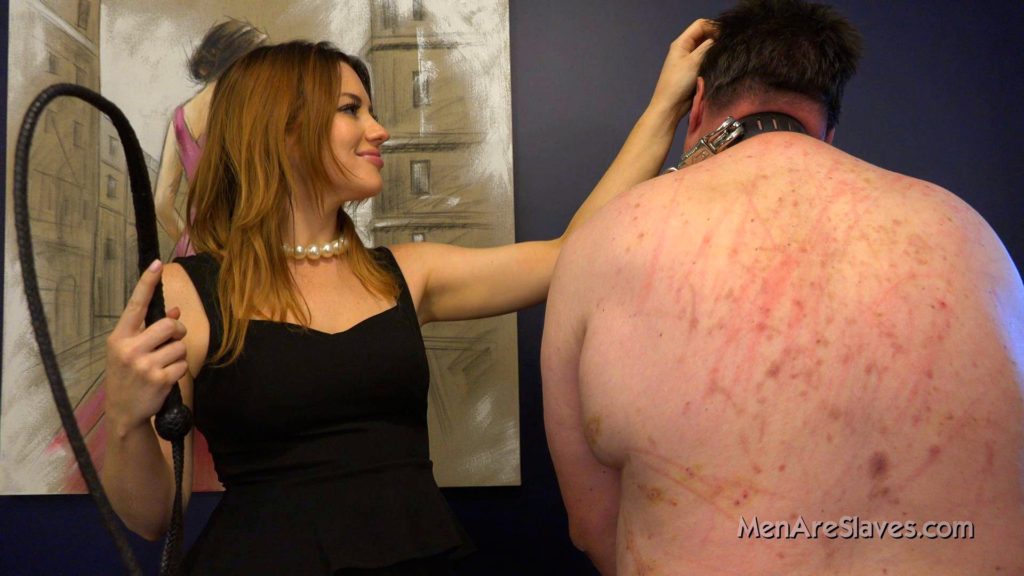 She moved her other hand onto his cock and started sliding it up and down his cock, almost like she was milking a cow. The strain on his face was so clear and plain she almost felt sorry for him, almost. She nearly sang out,

We Can Do This From Now On

After a few more thrusts she could see the agony on his face and she said,

She said. When she saw his head move up and down she started counting down, each number followed by a thrust.

He gave her a tired smile and said,

She gave him a smile and, while rubbing his cheek, she said,

John gave her an almost hopeful look and asked,

Without a moment’s hesitation, John nodded his head and said,

Sasha didn’t say anything she just undid John’s ankles and left one handcuff on John’s wrist and handcuffed it to the other one. When John turned around to face her she was standing up and walking over to the dresser. When she got what she wanted she walked back over to him, the item semi-hidden from his view. She was holding a chastity cage in front of him and said,

Then she bent down in front of him and locked it around his softened cock.

John’s eyes widened in shock and amazement. The shock from all of the sex toys, various other contraptions hanging from the wall, and something from the ceiling. The amazement came from the fact that she was able to get all of this here and set it up without him ever knowing about it. She led him over to the corner and said,

She led him to the corner of the room where a mattress was laying down on the floor with nothing else. Then he saw a chain snaking down from the wall and into the crevice between the mattress and wall.

Before he could ask, she led him to the wall and said,

John did as she ordered, not wanting to risk getting punished by her. He stuck his ass out as far as he could while keeping his face to the wall, waiting for her to do whatever she was about to do.

The Pear Of Anguish

When he got himself positioned she walked over to the mattress and reached in between the crevice and grabbed the object and walked back over to him. It wasn’t even a minute later when he felt pressure against his asshole again, which caused him to gasp and tense up, which she immediately stopped. He held his breath as the object penetrated his asshole, getting larger and larger, then getting narrower again.

His curious look turned to fear, but she continued,

Then she undid his handcuffs and walked away, leaving John alone in his new room to contemplate his new life.

My Dominant Lady And My Slave Training (3)