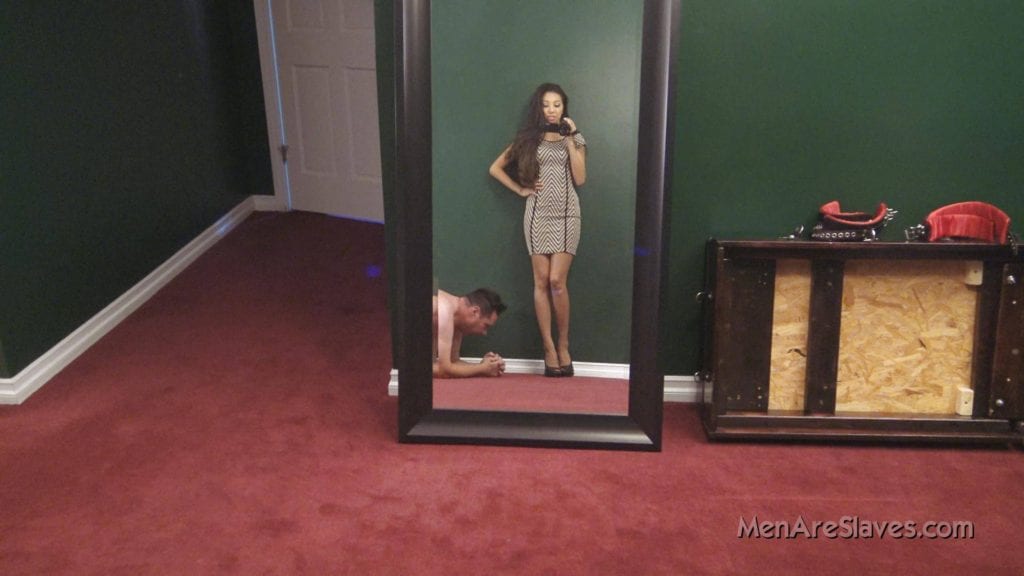 My beautiful black femdom goddess nodded with satisfaction and pointed at Cal’s shoes. “Show him what a handy little thing you are to have around. His shoes are all dusty. I want you to clean them.” I turned to go fetch a dust cloth, but she stopped me. “No, you white shit, I want you to clean his shoes the way I’ve taught you to clean mine. With your honky tongue.” I hesitated, but the pressure from her Black, glaring eyes was too much for me. Heartsick, I did as she had commanded sinking to my knees in front of the sofa and licking Cal’s expensive black shoes with my tongue

Halfway through with his second shoe, I was shocked to hear the sound of a zipper being pulled down and I glanced up from my work to discover that my beautiful black femdom goddess had unzipped Cal’s trousers and had taken out his Big Black Cock. It was already erect, stiff and throbbing. It looked so intimidating and menacing that I instantly felt passively submissive and inferior. Although I was fascinated by my brief glimpse at it and secretly wanted to look closer, I quickly looked away in terror because I had seen that it was enormous, at least nine or ten inches long.

It was thick and heavy looking too, with a bulging, big, thick mushroom-shaped black cock-head that was fully engorged, taut and pulsating. The glistening Black knob was as big and shiny as a very large apple and appeared to be just as hard. Cal’s cock was at least three times longer than my pathetic little pin-dick and at least twice as thick. Christ, it looked like a Big Black Anaconda rising up out of his pants. My God, if this was the way Black guys were hung, no wonder Bella always pointed out what a puny little white thing I had!

There was something about its size, shape and pulsating energy that captivated me and unleashed some kind of forbidden, taboo,  primitive fascination deep in my subconscious mind that both frightened and thrilled me. I couldn’t stop staring at it and out of the corner of her eye, Bella intuitively sensed my almost hypnotic obsession with the thick, long, black snake she was seductively fondling with her well manicured fingers. Suddenly, she interrupted her necking with Cal to inspect my work.

My Maid Has Earned A Reward

Satisfied that I had done a thorough job of cleaning his shoes, she smiled at Cal, winked at me and said, “I think my maid is fascinated by her first glimpse of a real man and I think she has earned a reward, don’t you, lover?” “Sure thing, Bella,” Cal grinned at my beautiful black femdom goddess. He rose from the couch and put his hands on his hips. Standing up with his pelvis thrust forward, his cock loomed over me like a black python and looked as thick and as long as my arm as it dangled dangerously close to my face.

I had never seen such a cock up close like this and the size of it took my breath away.  I suddenly felt dizzy, dazed and confused. Cal sensed my weakness and it seemed to excite him as he stood over me like a conquering hero preparing to sample the spoils of war. His magnificent cock pointed at me menacingly as several droplets of clear fluid formed just below its single eye, indicating that he desperately needed to release the pent-up pressure in his heavy, low-hanging cum-filled balls that were as plump and round as a prize Bull or a Stallion turned out to stud.

Fully Aroused And Ready To Put It In My Mouth

He was obviously fully aroused by now and his cock jerked, twitched and dangled back and forth as he moved closer to me with the lithe, quick movements of a Panther ready to pounce upon its prey. I could feel myself begin to panic. My beautiful black femdom goddess started to speak, but for the first time in my life I interrupted her. “No! Oh, please, No Ma’am, I just cannot!” I begged her. “Don’t make me, please, don’t make me, Bella!” She only chuckled. “Don’t be silly, asshole,” she whispered. “Every white dude in the world would just love to be on his knees sucking Black cock. The only difference is that some of them admit it.”

She reached forward and shook Cal’s enormous tool at me. “Now stop that silly blubbering and do what I tell you. It won’t hurt you. I mean every girl learns to suck cock and you will too. With a tiny, worthless little clittie like yours, you will never be able to sexually please a girl; but, you can at least learn to be a good little cocksucker. Like all tiny dicked little sissy white bois you will discover you have a natural talent for pleasing Black cock. In fact, you will eventually learn to love sucking cock and I will take great pride in your cocksucking abilities. 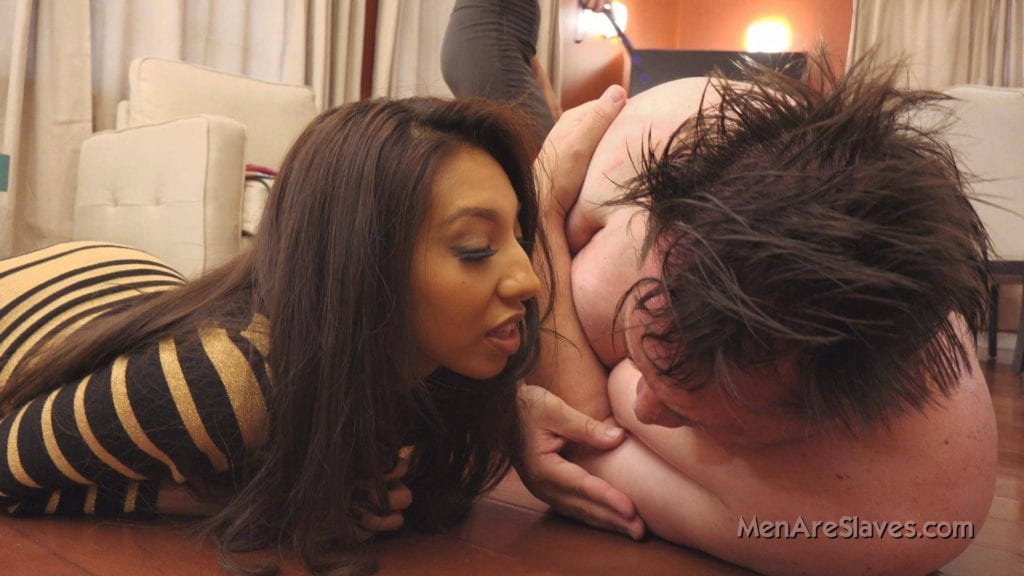 Really, shit-head, your big moment has come. Don’t disappoint me!” Her words stung me and I had an obsessive desire to run away. In retrospect, I should have gotten up and run out of the house, I suppose. Even being seen on the street dressed as a pretty French maid would have been better than … than letting her turn me into a cocksucker. COCKSUCKER! The hateful word rang in my mind like a klaxon. If I had even the slightest inkling that Bella intended to force me to perform sexual services that were even more humiliating, degrading and disgusting than sucking cock, I think I probably would have had the courage to jump up and run out of the house.

The Most Humiliating, Subservient Experience

From now on I would be Bella’s, both in mind and soul. Cal thrust forward, fucking my mouth, and I felt his cock nudge into the entrance to my throat. I started to gag and slobber as I heard Bella tell him to take it easy. “I want to break her in right,” she said, “Just ease back a little, Cal, and let me do the rest. You can teach her about deep-throat next time.” Cal relaxed slightly and I found I could breathe again. I was grateful, though I hadn’t really been aware until then that his cock had stopped my windpipe.

Relax And Use Your Pretty Tongue On Him

“Next time,” she promised, “I’ll let you do it all by yourself. With practice, I’m sure you will become an excellent cocksucker and I will be so proud to show you off to my friends. You want to please Bella and make me proud, don’t you punk? Learning to be a World Class Cocksucker will make me very proud of you and will please me very much. Now flick your tongue rapidly against the soft, sensitive underside of the tip of his cock, Sugar Plum. Then, run your tongue all over the his cock-head in a figure eight pattern, Sweetie.”

I could tell she was pleased with my energetic and frenzied efforts to service Cal and I began to relax and actually began to enjoy the taste, texture and feel of that hot, thick, pulsating Black cock as it jerked, twitched and probed the soft, velvety recesses of my virgin young mouth. After a minute or two of Bella’s manipulations, I could feel the cock in my mouth stiffen to its final hardness. Beneath its soft sheath of skin, I felt its iron-hard core. Cal’s thighs began to tremble, and I knew he was almost there. So did he, of course.