The Dominant Student And Her Experiment (2)

There were only a few days left before dominant Amanda was leaving for Mineral Beauty Spa to present her thesis on the drug XY-84, but the university student had an idea that was swirling in her head. “What if the drug works on women?” She thought about this for a few days and even did a quick test on a couple of female mice and was pleasantly surprised to see that she received the same results as she previously did on the male mice. She decided to run the same test she did on Jeremy on two female students.

Brigitte and Jennifer were Amanda’s classmates at the university. Both girls didn’t get along at all. Brigitte was a girl with long, straight blond hair, blue eyes, white skin, and a very tight body from all the years she practiced gymnastics, while Jennifer was a swimmer with short black hair, brown eyes, and white skin. Both girls were quite different. While Brigitte was considered a slut, Jennifer was considered a goth girl. Both girls always got into heated discussions and none of them could tolerate the other.

Dominant Amanda prepared a dose of the drug, but this time she put it in a bottle of perfume and prepared her room for the experiment. Amanda went running around the campus looking for the two girls. She finally found them in the library discussing some unimportant topic and Amanda approached the two girls and with a quick movement sprayed a little perfume on both girls’ faces. “What the hell?” Screamed Brigitte while covering her face. “Why would you do that Amanda?” Jennifer shouted while covering her mouth to sneeze. Amanda stopped in front of both girls, “The two of you go to my room.” Amanda walked to her dorm room and waited to see if the two girls would arrive. 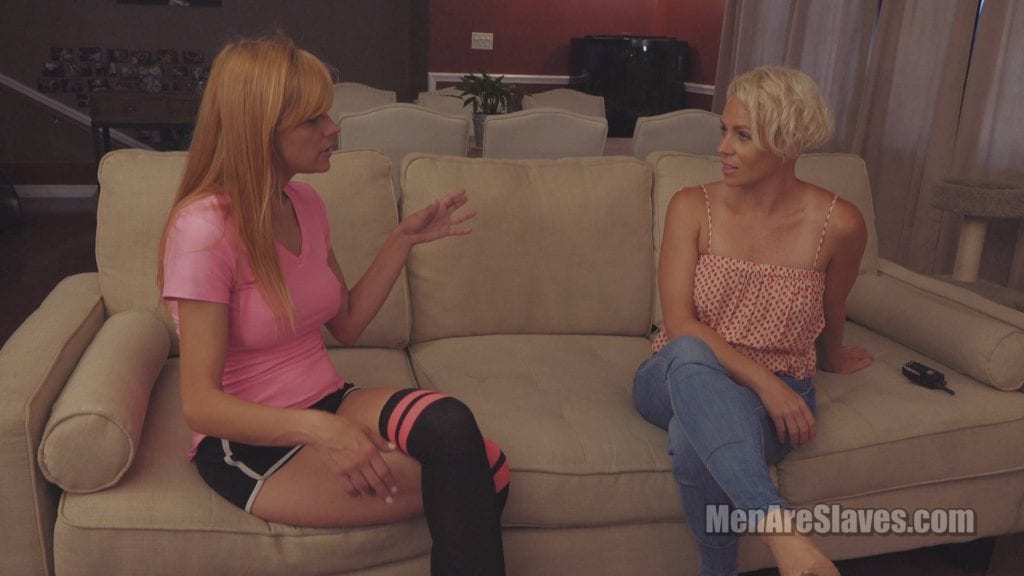 Smack Each Other With The Leather Paddles

Amanda took her smartphone, laid down on the bed, and started recording the scene. “Ladies, I want to see the two of you french kiss.” The two girls approached each other hesitantly and started kissing each other. “More passion ladies, I want to see you warm the camera.” Both girls started kissing each other intensely. “Nice ladies..Jennifer takes Brigitte’s clothes off.” The girls stopped kissing and Jennifer started taking off Brigitte’s clothes. Brigitte was standing in front of Jennifer completely naked. “Brigitte, take Jennifer’s clothes off.” She removed Jennifer’s clothes while Amanda was still recording the scene.

Dominant Amanda thought about the different orders she wanted to give the submissive girls. “Take each other’s panties off and put them in each other’s mouth.” With repulsed looks on their faces, they did what they were told. Amanda took a couple of leather paddles from her drawer and said, “Now I want each of you to give yourselves twenty licks with the leather paddle.” Without any hesitation, both girls smacked their butts twenty times with the paddles. When they finished, they still had their panties in their mouths. “I hope now the two of you will stop fighting a bit,” said Amanda.

Amanda finally came all over Jennifer’s face and changed position so Brigitte could savor her wet clit and Jennifer could lick her asshole. Amanda enjoyed both girls until the drug started to wear off. Once the drug wore off, Amanda allowed the girls to get dressed and go back to their rooms. When the girls left, Amanda was still very wet. She thought to herself, “I should invite another friend to my room.” Amanda left her dorm room with the perfume to look for another test subject.

The Dominant Student And Her Experiment
Previous

Strapped In The Fuck Bench