But I felt totally betrayed. I felt that the relationship with my husband had been violated. How could he do this? His first reaction made me even angrier. He defended himself by saying it was not like seeing a prostitute. He did not have sex with that woman. Where have we heard that line before? When he told me that, I just exploded and told him to leave the house. If he couldn’t understand why I was so angry, I didn’t want him anywhere around. He just couldn’t understand that I was angry with him for having a relationship with another woman.

When Jack left the house, he went to stay with his sister. She was very curious, but just assumed we had a bad fight about something or other. Jack’s sister has been one of my best friends for many years. We were in the same dormitory in college. She is the one that introduced me to Jack. We share a lot, but I was not in a mood to tell her what had happened.

At that point in time, I wasn’t sure what had happened myself, except that I didn’t want Jack in my bed or in my house.

Over the next few days, Jack called the house every evening asking for a chance to talk. I told him that I just didn’t want him in the house. A week later we agreed to meet at a nearby coffee shop. I listened to what he had to say. He talked about his need to submit to a strong woman, and a little bit about his cross-dressing fantasies. I told him he was pervert, and I was not really interested in what he had to say. The truth is that I was mad at Jack, but I never stopped loving him. That evening I went home and got on the intent. I think I started by googling ‘submissive man’. The porn that came up was terrible, but I worked my way through a lot of trash to find some valuable information on dominance and submission. The thing that impressed me was the amount of information. It occurred to me that maybe there are a lot of submissive men in the world. If so, may be my little guy was not such a freak of nature as originally thought. Over the next several days, I downloaded some books, looked at magazines, and even got on a couple of on line forums. It was interesting. It was like uncovering a husband that I never really knew I had.

After thinking about everything that had happened, I could accept the idea that Jack was submissive. As a Christian, I have always had the feeling that God made us the way he wanted us to be. I have always felt that we should accept people the way they were if it did not harm anyone else. When I was younger, a male cousin announced to the world that he was gay. Many members of his extended family wanted nothing more to do with him. As a liberal college student, I went to his defense. I told my parents that god is the one that made him the way he was, and it was up to us to accept that. Today, being gay is no big deal, but that many years ago.

I needed to understand this. Who was this woman that had a relationship with my husband? What was her hold on my husband? Why was he willing to pay her money?

I called Jack and told him that I wanted her name and phone number.

When I discovered that Jack had been paying money to see a dominatrix, it was like my entire world came crashing down. At that moment, I didn’t want anything to do with him. Aside from the simple idea that he was paying money for sexual services of some kind, it was money that we needed for our family. We had two children in college. Jack made a decent salary, but with college, car notes, insurance, and all; we were always tight for money. At one time, we even decided to pass on a summer vacation just to be sure there was had enough money for college. I felt so alienated from him. Once again it felt like there was a he and a she. It no longer felt like there was an us. Just the thought hurt. 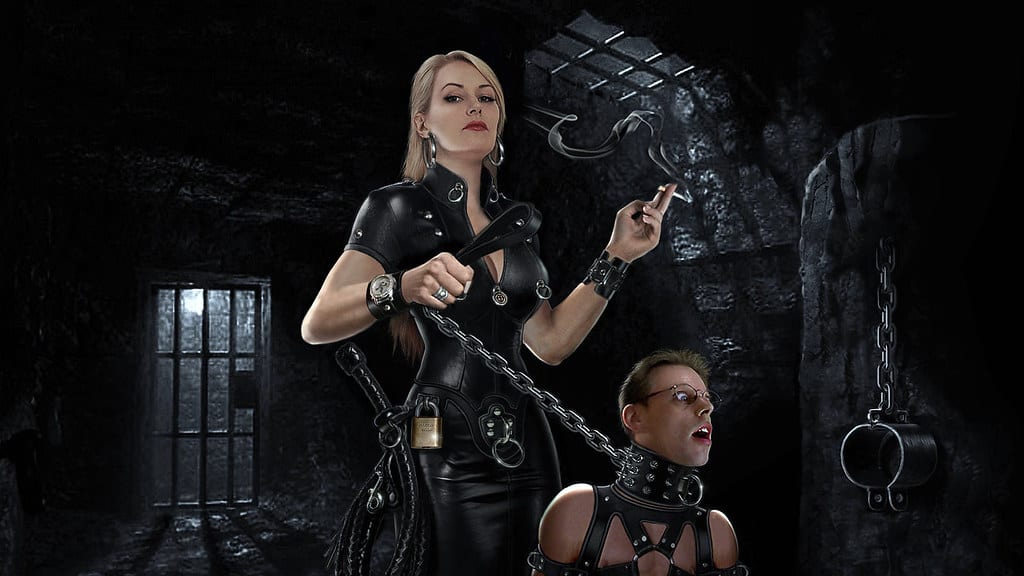 There was a lot of information on the internet about dominance and submission. Most of it was trash, but I did get the idea that the job of dominatrix was to bring men to their knees in some way, shape, or form. I saw the pictures of big bested women with scanty outfits holding whips in their hands. It gave me a sick feeling. When I told Jack that I wanted her name and phone number, he gave me only an Uh and then silence. I repeated and told him that if he ever wanted to be back in the house he had better tell me what I want to know and to do is quickly. He gave me the number and then hesitated. I said tell me her name. He said, ‘mistress Kimberly’. I just laughed when I heard the mistress word. I thought while she has him by the balls.

After some hesitation, I called. A man answered. There was no way I was going to ask to speak with Mistress Kimberly. I briefly explained to him that my husband had been seeing a lady by the name of Kimberly, and that I wished to speak with her. I really thought he was going to hang up the phone, but after a few minutes a female voice answered with a ‘hello, I’m Kimberly, how can I help you.’ I remember the knot in my throat as well as I remember anything that happened on our wedding day. I just told her that my husband had been one of her customers, and that I would like to talk with her. Without hesitation, she ‘Kimberly’ invited me to her studio, as she called it. She said, don’t worry, her studio was female friendly to a degree and she would love to visit with me. The door was opened by a middle age man wearing yellow panties and a big yellow ribbon in his hair. I was a little taken back by the site of this gentleman, but he was extremely polite. As he took my rain jacket, he did a curtsy, and bowed his head. At that moment Kimberly came walking in. She greeted me with a smile and a handshake. With Kimberly in the room the gentlemen no longer spoke. He just looked down and followed us to the living room. She instructed him to bring us each a glass of wine.

Again, as he entered the room, he did a curtsy. In my entire life, I have never dreamed a man would ever act so subservient in front of a woman. I was embarrassed for him. She simply dismissed him from the room with a small swipe of her hand. He did a curtsy and left. I thought this woman may be a bitch and thief, but she knows how to handle men.

Kimberly, excuse me, ‘Mistress Kimberly’ and I spoke for well over three hours. We talked about her, her education, and how she got into this type of work. We talked about men. We talked about men in general, and then we talked about my Jack. That part of the discussion left me flabbergasted. She knew so much about Jack. She knew the names of our children, their ages, and where they went to school. She knew what we both did for a living. Above all, she knew that Jack was very submissive. The disturbing part was that she seemed to know more about Jack than I did. Kimberly told me that my Jack was very submissive, but in her experience, there are a lot of submissive men in the world; and it is nothing to be ashamed of. She laughed and said it is a lot better than being an axe murderer. At least I could agree with her on that. After a while I asked her the same questions I had put to Jack. I asked her: “What do you mean by submissive?”. She said in simplest terms that submissive men are those who like to be bossed around by women. That time it was my turn to laugh. Each time we were close to finishing a glass of wine, she clapped her hands. At that signal, the middle-aged man came into the room, did his curtsy, and brought us another glass.

I had to ask her how he knew the clap meant to bring another glass of wine. She just laughed, and said it is the way he is trained. One clap means bring another of what we are having. Two claps meant ‘come in for directions’. Sure enough, when it was time to leave, Kimberly clapped her hands twice. Her male servant immediately came into the room, and she told him to fetch Miss Caroline’s rain jacket. Again, I thought this woman knows how to handle a man.

On the way out, I asked about her male servant. I told her that I was impressed with how well he obeyed her. She told me that he was one of her favorite slaves. When she used the word slave, I was a little taken back. She waited just a second and said, yes, he really is a slave in most ways. Legally he is free to go where he wants and do what he wants. However, she explained there is nothing he would rather do then to serve her. By this time, we had reached the front door where the gentleman was waiting with my jacket.

Since he was then next to us, I assumed she would stop talking about him. To the contrary she continued talking about him in the third person just as if he was not in the room, or as if he was a pet. Once again, I felt embarrassed for him in this awkward situation, simply having to stand there, in panties, holding a jacket, listening to two women talk about him. Again, I wondered just how subservient a man could become when under the influence of a woman.

On one hand, I could tell Kimberly felt very bad about the hurt she caused me. On the other hand, she implied that she helped Jack find something that he needed, that he couldn’t get at home. She invited me to come back. She wanted me to view interactions with some of her clients. She wanted me to understand more about what she did with men, and why it was important for submissive men to have a dominant female in their life. By this I knew that I also wanted to know more. T

Foot Fetishists Rejoice
Women dominating men - Worshiping the Divine Goddess
Domina Mistress, A Letter To You
How to Control Your Submale
6 Dominatrices on How They Stay Fit
Absolute territory for ponytails just might be Japan’s newest pinpoint fetish
FETISH FASHION GOES MAINSTREAM
19 Women Talk About The Surprising Sexual Fantasies They Would Never, Ever Tell Their Boyfriends Abo...
Previous

The Best way to have a FLR Relationship