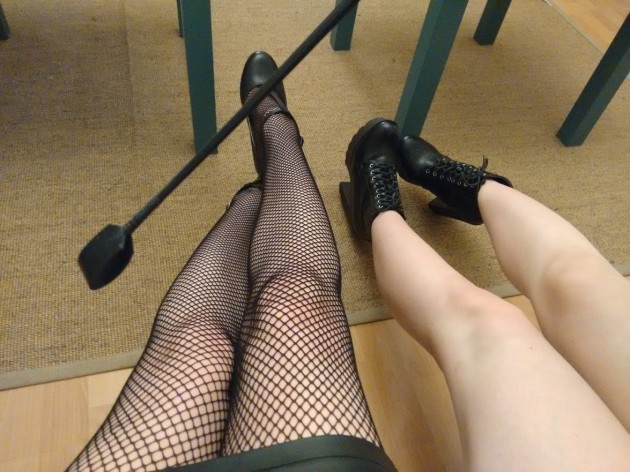 LOOKING AROUND AT signs reminding patrons that ‘No means No’, I thought how wonderful it would be to have these on the walls of every fetish club.

They were a reminder of the frequent instances of being groped by men I’d never set eyes on before and of – usually – being branded a “moody b***h” for protesting.

And here I was, dressed in fishnet stockings, a short leather skirt and a barely-there bodice, surrounded by people in similar states of undress and I couldn’t have felt more comfortable.

It was my first time at Nimhneach, Dublin’s fetish club night – and it won’t be my last. 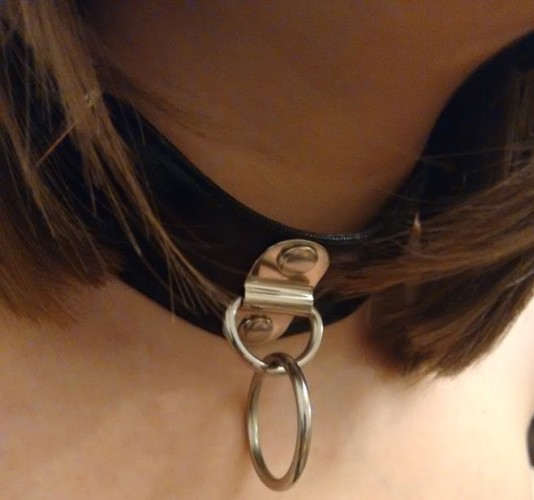 Organisers invited this curious TheJournal.ie reporter and a friend along to the Voodoo Lounge on Arran Quay to get a feel for a club night which is somewhat shrouded in mystery.

For all intents and purposes the venue looked as it always did with just a couple of notable differences – mainly the large contraptions in the corner of the room behind red velvet ropes.

One, we were told, was a spanking bench and the other was a Saint Andrew’s Cross which already had a young woman tied to it. She was being flogged by a man of similar age on the back and shoulders – and not lightly. Before I had even come through the door,I had heard the crack of leather on her flesh. I was wincing, she looked remarkably peaceful. 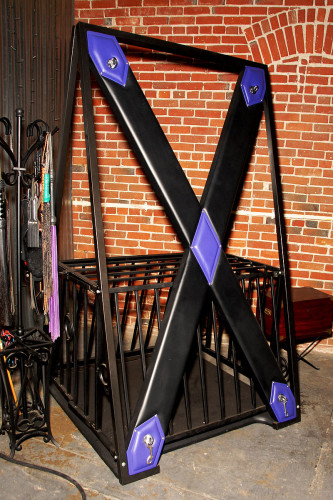 She described herself as “switch” – someone who plays both dominant and submissive roles in the “scenes”. Whipping and flogging are her preferences though. Robert favours rope play. Neither of them seem to have any issue with their spouse “playing” with another person.

The picture they paint of the fetish scene in Dublin is one of strict rules to ensure everyone is safe and all parties get maximum pleasure out of the experience. There are even workshops held to teach people how to properly participate in certain types of fetish play.

The couple admitted some of the activities can be dangerous and that is why people follow the rules so stringently.

Robert explained, for example, that there are parts of the arm you must avoid when tying someone up unless you want to entirely stop blood flow to their heart. He has detailed discussions with the women he ties up before he starts, and recalled one who wanted him to avoid so many areas he ended up just tying rope around her elbow.

He also carries a small knife on his belt in case someone needs to be freed quickly.

Equally, Maura says a discussion about where and how hard to flog a person is paramount and of course you must have a safe word for when it all gets a bit much.

As she showed us her case full of whips, riding crops and leather straps she said she would usually only trust a person she knows to flog her though she would occasionally follow a recommendation. If you have a particular knack for something, word gets around.

In the same way, anyone who oversteps the mark or ignores requests to stop will quickly get a name for themselves.

An oasis of consent

Despite the fact that we were in the most raunchy outfits we’d ever worn outside our own (or someone else’s) bedrooms, we never once experienced the unwanted attention we are often faced with in regular clubs. No one touched us at all, no one drunkenly leered at us and we never once had to ask someone to please leave us alone.

“I had a friend who was at a normal club and a guy touched her. She went straight to the bouncer and said: ‘He touched me non-consensually’. He looked at her like she was mad,” Maura told us. “If that was here, the guy would be kicked out straight away.”

Nimhneach, where have you been all my life?

While we witnessed several admirably fierce dominant women, it was the submissive women I found most intriguing.

It’s not, contrary to what some might say, all about a dominant man getting to do whatever he wants to a helpless woman. At Nimhneach, I witnessed men restraining women with ropes and flogging them mercilessly and the women were loving every minute of it. Fair play to them, I thought. They knew what they wanted and they were getting it.

Before a couple ‘plays’ they both agree terms and the submissive will tell the dominant exactly what it is they want from the scene – where on their bodies to strike them or where to avoid and how hard they want the other person to go. Once a safe word is uttered, that is where it ends.

No really does mean no at Nimhneach and there are ‘dungeon monitors’ wandering around all night making sure everyone is respecting the rules and being safe. 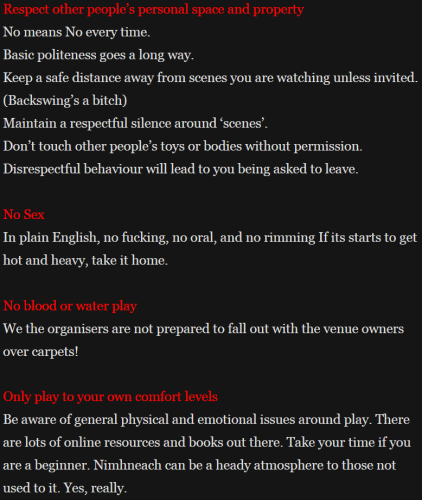 In conversation with one of the organisers I found myself referring to Nimhneach as a kind of “oasis of consent”.

“In a world without,” he added.

The women are in an incredibly safe space where they can explore and figure out what it really is that gets them going. Though we were all wearing outfits that would turn heads in any other place there were no bitchy up-and-down looks at one another.

There were women of all shapes and sizes, old and young and they all looked comfortable in themselves and at ease in their surroundings. It was the first club night I’ve ever been to where I thought all of the women there looked in the mirror and liked what they saw.

And rightly so, everyone – both the woman and men –  looked great. It turns out I’m not as opposed to a man in leather chaps as I would have thought.

If there’s no sex, what’s the point?

As the night wore on, we moved upstairs where there was a four-sided contraption with people strapped onto all sides, men and women, all being flogged or whipped. A crowd had gathered in the small, by this stage quite warm, space to watch and somehow it wasn’t weird.

In another corner was a man lying on the ground with two women standing on him with their heels. One was standing on his face and he looked more relaxed than I think I have been in months. I wasn’t about to ask them to ram their stilettos into my forehead but good for him.

Behind them, a woman in her early twenties was being flogged by a man almost three times her age. When they were done, she turned to him with a massive smile on her face and thanked him. They hugged, wished each other a good night and went their separate ways.

So in the spirit of thoroughly investigating the topic (and admittedly after a couple of G&Ts), I also found myself tearing into a short rotund man – dressed in a kind of PVC swimsuit – with a riding crop. It was by no means a source of arousal for me but I can’t deny it was really bloody (in the metaphorical sense) fun. And again when it was over that was the end of our interaction and there was certainly no expectation that I was going home with him.

Later at home my friend said: “I don’t get it, if they don’t have sex afterwards what’s the point?”

I wondered the same and remembered a woman from earlier in the night in the ladies toilets with brutal lashes on her rear end. She tried to explain the appeal to a baffled bathroom attendant.

I’ll be bruised tomorrow but it feels so good. It’s like getting a deep tissue massage.

For her it was a freeing experience, a relief from tension – and without an orgasm. In fact everyone I saw participating in scenes throughout the night looked relaxed and comfortable.

The pleasure can come from experimenting with your body’s reaction to different stimuli, from testing your own limits and from the excitement of sometimes pushing the boundaries.

In the end for me it was essentially like most other Saturday nights out with a friend meeting new people, except with some rather more interesting things happening in the corners of the room than drunken saliva exchanges. I’ll definitely be back. 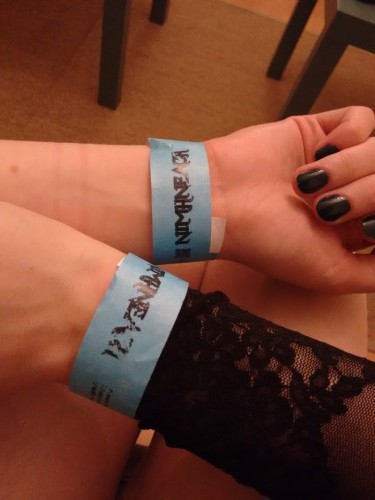