My Dominant Female Owner Destroyed Me In The Wrestling Match

It’s been exactly one month since Cindy totally emasculated me by seriously destroying me in the first few minutes of our wrestling match. A bout I INTENDED to let her win. Turned out my intentions were unnecessary and had nothing to do with the final outcome which was me overpowered and underprepared to deal with her physical superiority.

So, yeah, she imposed her will on me with great relish and determination, which is another way of saying she beat on me until I promised I would do anything, ANYTHING! to get her off of me. Finally, she dismounted, sat on the edge of the bed and pointed to a place on the floor at her feet. She didn’t have to point twice. My new home, I thought. I settled in quickly, sitting facing her as she reached out as if to pat me on the head then, instead, grabbed a handful of my hair with her right hand and slapped me vigorously 3 times with her free hand. She’s a southpaw! This occurred to me while she slapped me. “Did you enjoy licking my feet?” she asked. 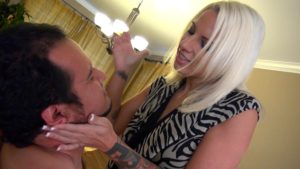 I gambled and said yes ma’am. (It was the least painless part of the contest so there was much truth in my reply. And there was no hiding the evident hard-on I was involuntarily sporting.) “Open wide loser” and I did. She inserted her right foot into my mouth and rested the other on my shoulder.
She reached over to an end table and got her iPhone and click, click, click, snapped 3 pics of me naked, hard, with a mouthful of foot. I have to say, none of them were very flattering. I really looked silly and would just hate it if anybody saw them.

“If you EVER disobey me….!”
I shook my head and her foot no. And I felt a peacefulness set in, a recognition that my life was forever altered, that I had a dominant female owner now that would direct my every move. And isn’t that what I had always fantasized about? Yes, I just wasn’t expecting it to happen that day and so quickly.

The New Rules I Live Life By Now

Maybe you’ve looked on-line for samples of these slave contracts as I did. They are presented with all this legalese flowery language about this party and that party and so on and after a few false starts I finally got the hang of it. I won’t bore you by quoting that part, I’ll just list the commandments I now live by. I should note that she has moved into my house now so my enslavement is now a 24/7 ordeal. She’s very happy about that but I sure miss my free time I had when we both had our own place. Here is what I’m not allowed to do;

State my opinion, disagree with her opinion, interrupt her, leave a room without her permission, leave the house without her permission, hesitate a millisecond before obeying an order, miss a smudge when cleaning anything, watch tv without her ok, use my iPhone to play games, forget anything she has said about anything, wear mens’ clothing at home, complain about the tightness of the little girls’ panties she bought for me, struggle against the dildo she butt rapes me with, use the safe word she originally allowed me to impose, squirm when she’s bitch spanking me… you see a pattern here? 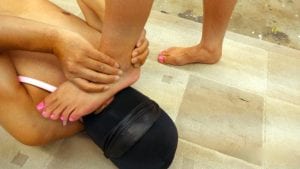 No Man Is More Dominated Than Me

I figure no man is more pussy whipped than I am. I’m also pussy trained, pussy disciplined, pussy owned and operated by a dominant female! I am a battered man, slapped around every fucking day for something whether I deserve it or not. (Of course I deserve it!) I need a vacation, a getaway, time off, a time out. Not bloody likely. You know, I was thinking the other day while I lay on the floor and she was standing on my face. I asked for this, never thinking it would happen, but it all started with my own initiative.

I spent years fantasizing about all of these things and it never hurt a bit in my reveries. Now I live in fear of displeasing her in any way but I admit it is such a delicious fear. I’m amazed that I’ve learned to take so much punishment in such a short time. You could say she has made me a stronger man, just don’t say that to her! Not sure how she’d react. Forcefully, I imagine.

I’ll check back with you later and let you know..