Becoming a Submale over Lunch 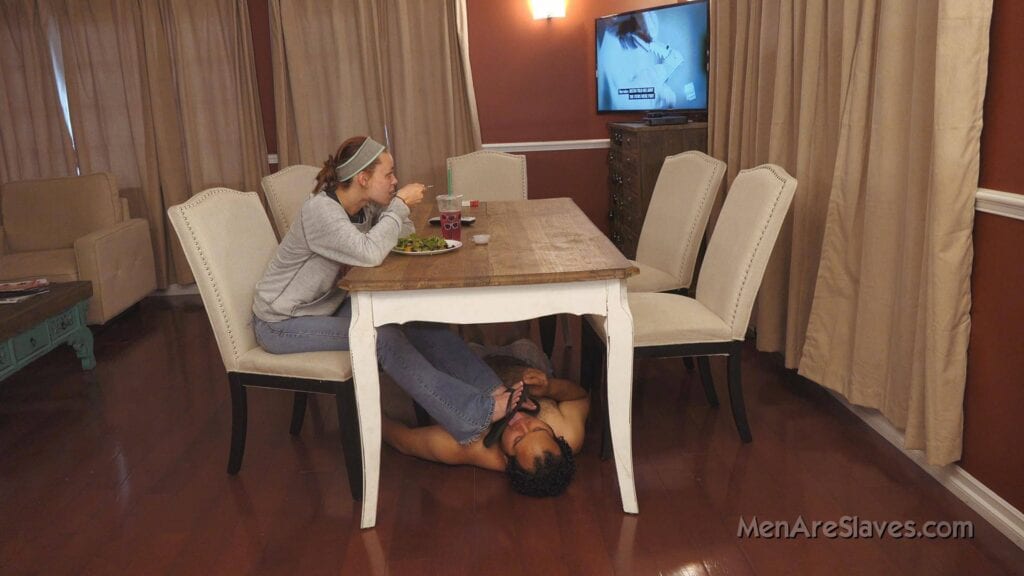 Becoming a Submale over Lunch

At the restaurant, Sandra and Hubert were talking. They had not worked together for a long time and Hubert has decided to seduce his colleague/co-worker.

He is talkative and he is trying to be brilliant and funny to impress this pretty woman.

Sandra lets him continue his show but she can’t wait to explain what she is really waiting for from this date. First, she is going to start with a lesson to teach him how to become her submale. She likes taking the control in her sexual relationship and acting out some unexpected screenplay/story.

By pretending to listen to Hubert, this beautiful forties woman is taking off her shoes under the table and then she is raising up very slowly her right foot towards the crotch of Hubert. This youngest man is still talking again and again. He seems to be confident in his power of seduction. He wants to have fun.

While staying silent, she stares at him ironically.

He still seems not to understand this sly and victorious glance.

Suddenly, she takes his hands slowly while smiling.

At the same time, Hubert feels Sandra’s foot under the table sliding between his crotch. He is quite surprised and starts to understand what is going on.

Sandra’s foot is really pretty. Hubert is hypnotized by what he sees. Sandra is jubilating because she feels his cock harden. She is delighted by this reaction.

He blushes and starts to stutter then stops talking.

She massages him gently with her toes and with her heel, gently pushing up on his family jewels. She then informs him;

“Why are you not saying anything? You are so quite. From now on you know that you are nothing more then my toy. I am a predator and you are my prey. I just needed a few minutes to catch you off guard , and now you shall have no words just beatings!”

These few words from Sandra grew the desire of Hubert’s fantasies. He now had a large erection.

The other restaurant’s customers seemed to not notice a thing that was going on between Hubert and Sandra. She is was very pleased by this.

“You have been mine since the first time we met and I decided that you would become my slave. I let you believe that I would accept your invitation when you invited me. It was the first step of my trap. You fell right into my trap right away, and I really enjoyed it.”

She removes her foot from his crotch and watches him with a cruel and mocking smile.

He turns pale and stammers an supplication:

“Yes I like it and I beg you to go on. I have never felt something so good.”

She triumphs laughing as she says :

“I said on your knees! Kiss my feet”

He drops his napkin and gets up to pick it up; he kneels before her and finally kisses her foot. He then gets up red in the face with shame. He feels little bit relieved when he notices that nobody was watching them.

Sandra puts her foot on the cock of her prey that was fully erect.

“Great, you will follow my orders and I want you to understand that you are under my power and you are totally mine until I decide you are not.”

His new feeling of submission excites Hubert more and more.

“I am going to give you lot of pleasure right now in this restaurant with all this people. You are going to wet pants. Then you will go to the restroom where you can place your pants in this plastic bag that you will give back to me. It will be my new trophy. You will see that I can do everything and anything I want whenever I want.”

“ I will keep this trophy. When I want you and your not around, I will put on the floor and I will put my feet on it. I will then call you to ask you to do all that I want as the good slave you are. Come on now don’t be shy!!!”

“Bring me my trophy, offer me your soul” Sandra tells him.

Hubert goes to the restroom and comes back with the small bag. He gives it to his mistress.

Sandra takes the bag and put it in her purse. The life at he office is going to be more exciting now.

Find the Man of your Dreams, a submissive handsome man

Never Been Happier as a femdoming woman