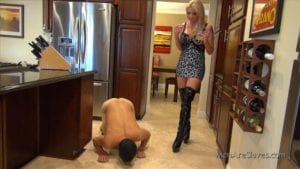 She used humiliation as a training tool not as punishment. If I found something embarrassing or humiliating she would repeat the experience over and over until I adjusted to it. After years of this I accepted my position and was able to perform my duties as instructed without hesitation.

She would lay on the bed naked with her naked lover stoking his cock to rock harness. Then she would ask me if I wanted him to fuck her or if instead I wanted to fuck her. If I did she would not fuck him. Oh how I wanted to. She would tell me to lift my dress and petticoat, show her my hard on so she could see I wanted to fuck her. I would do as she told but since my little cock was well tucked back between my legs with my testicles pushed up inside me and my tight panties keeping all in place there was no hard on. She would laugh and point this out to her lover and then fuck him while I stood by watching.

She made sure to tell her lover how much bigger and better he was than I was. After many times of this I was mentally castrated and could not possibly get it up.

Up until now she had only been with white men but one night she went Black. As always I was to wait up for her and it was quite late when she returned that night. I could tell she was still very sexually wound up. Her ritual was for me to lay on my back on the bed and then sit on my face and while I ate out her well fucked pussy. She would tell me about her evening stressing how great the sex was and how proper it was she had real men.

This night she asked me if I knew how many men she fucked and from how swollen and red she was I told her 5. She laughed and said no, it was only one but he was a real man the first real man she had ever had sex with he was a Black man!

Needless to say it made me twice as submissive as before and she noted it. She said how much she liked it that I was even more submissive and obedient than I already was. She did have a few more white cocks until she found enough Black lovers to keep her well satisfied. During this process she taught me to worship and serve the Superior Black race. More than once I was the servant sissy at a Black hosted dinner party where my wife attended as the hosts lover. We were both introduced to the guests as to who we were. Her as his personal slut and me the sissy cuckold husband wimp.

I am now a humble white servant to Blacks and have fully accepted that this is the proper place for all white males.